TOKYO, (UrduPoint / Pakistan Point News / WAM - 26th Jan, 2020) Ambassador Lana Zaki Nusseibeh, UAE's Permanent Representative to the United Nations in New York, has completed a visit to Tokyo, Japan in her capacity as Co-Chair of the Intergovernmental Negotiations, IGN, on Security Council Reform for the 74th Session of the UN General Assembly. The visit was at the invitation of the Japanese government and followed her visit to Beijing, China.

The discussions focused on the ongoing reforms within the UN system – in particular the Security Council – and championing multilateral cooperation to better respond to current and emerging challenges around the world.

"We were honoured to have this opportunity to meet with Japanese officials and deepen our understanding of their position and expectations on UN reforms," Ambassador Nusseibeh said. "Japan does not shy away from shouldering the burden of contributions to maintaining international peace and security. They are the third largest contributor to the UN’s regular budget, and they play a proactive and constructive role in advancing cooperation and dialogue. This visit further underscores the importance that Japan attaches to shaping international fora to better respond to the needs of the world today."

UAE’s Ambassador to Japan Khaled Alameri accompanied Ambassador Nusseibeh to the meetings. He added, "Japan is an important partner for the UAE and was among the first countries we established diplomatic relations with when our nation was founded in 1971. Since then, our bilateral relationship has been rooted in trust, cooperation and respect. We look forward to continuing taking our partnership to new heights across various sectors including energy, frontier technologies, space and education. We also welcome Japan’s participation in Expo 2020 Dubai which will open later this year."

The current Intergovernmental Negotiations on Security Council Reform process will begin at the UN in New York in February 2020. Ambassador Nusseibeh stated, "Security Council reform is a fundamental yet sensitive issue that touches upon the most basic security interests of Member States. We will be working impartially, transparently and inclusively with the membership of the UN to demonstrate the continued credibility and relevance of this process." 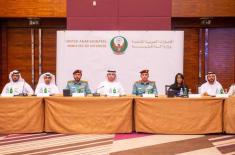