The stimulus will bring relief to poor people and millions of migrant workers whose jobs have disappeared overnight because of the lockdown. April 1 marks the beginning of India’s new financial year.

"We do not want anyone to remain hungry," Sitharaman said in her announcement to reporters. The massive stimulus is expected to give business the necessary confidence to ease up on supply constraints for essential commodities of daily life so as to avoid panic buying by the masses.

This is Sitharaman’s second announcement of relief measures in three days. In her first announcement on Tuesday, the Finance Minister relaxed the norms for compliance with economic laws.

In the coming days, the government is expected to provide relief to business sectors like aviation, hotels, hospitality and small companies by deferring taxes for those industries, which have been hurt the most by the lockdown.

Sanjeev Sanyal, India’s Principal Economic Advisor, said on national television on Thursday night that the government is adopting a step-by-step approach to deal with the economic fallout of the COVID-19 outbreak.

The first step was to relax compliance norms, today’s decisions are aimed at protecting the poor and daily labourers, who are most vulnerable. The next step is to provide succour to business and industry sectors which are severely affected by a cessation of their activities.

The objective of today’s stimulus is to help feed approximately 800 million poor people during the next three months when the impact of the Coronavirus pandemic is expected to be felt severely in the society.

This objective will be achieved by distributing five kilogrammes of wheat or rice and one kilogram of pulses per poor citizen per month free of cost for the next three months. The government will also supply free cooking-gas cylinders to 83 million poor families.

The Finance Minister also unveiled a medical insurance scheme for health workers who are in the frontline of fighting the Coronavirus pandemic.

Meanwhile, India’s confirmed cases of COVID-19 rose to 720 of which 660 are now active, according to the government’s website which is updated every four hours. Forty five patients have recovered while 15 persons have died from the disease. 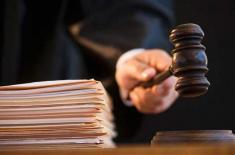