Caracas, (UrduPoint / Pakistan Point News - 18th Jan, 2020 ) :Venezuela will open a casino where all bets must be placed in the country's ailing "petro" cryptocurrency, President Nicolas Maduro said Friday, overturning a ban on casinos in place since 2011.

Maduro said he had "authorized legal gambling" in petros at the Humboldt Hotel in Caracas and that the resources would be used to finance "health, education, in convertible currency, in foreign currency." The cash-strapped country is currently reeling under US sanctions imposed in an attempt to force Maduro from power.

Chavez, who was in power from 1999-2013, signed a decree in late 2011 ordering the closure of casinos and bingo halls in Venezuela, but the economy's serious liquidity problems appear to have changed Maduro's mind.

Earlier this week, the socialist leader had used his annual speech to the ruling Constituent Assembly to try to revive the controversial petro that has been banned by the United States and labeled a "scam" by some risk-rating bodies.

Maduro decreed that airlines flying from Caracas must pay for fuel in petros.

Backed by Venezuela's vast oil reserves, the petro was introduced in 2018 as a way to circumvent wide-ranging US sanctions and overcome chronic liquidity shortages.

Maduro wants the virtual Currency to become a widely used means of payment by Venezuelans, yet most people have no idea how to use it.

Risk rating websites icoindex.com describe the petro as a "scam." But while the petro has failed to win investor confidence, other cryptocurrencies have proved hugely popular in Venezuela as a refuge against hyperinflation.

Maduro last December approved bonuses in petros for public employees and pensioners. However, experts said the petros were quickly changed back to bolivars and then to other currencies.

The government last week blocked the exchange of petros for bolivars.

US economy solid, but virus could hit supplies: Fe .. 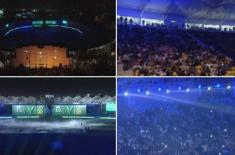