15 Held During Crackdown Against Criminals, Drug Pushers In Capital

ISLAMABAD, (UrduPoint / Pakistan Point News - 5th Jul, 2020 ) :Islamabad Police have arrested 15 persons during the last 24 hours in its crackdown against drug pusher and criminal elements, and recovered stolen bike, narcotics, alcohol and weapons from them, a police spokesman.

A team of Tarnol police station arrested three drug pushers namely Gul Taj, Ismail Khan and Fazal-Rabbi and recovered a total of 4.8 kilogram heroin from their possession while a bootlegger identified as Pervaiz was held for having 10 liter alcohol. Another police team arrested two bike lifters namely Pervez and Rasool Khan and recovered stolen bike from them.

Kohsar police arrested Ehtesham and recovered one 30 bore pistol from him. Koral police arrested an accused Qasim involved in selling petroleum products illegally in the area while four other persons were also held for their alleged involvement in immoral activities.

Separate cases have been registered against the nabbed persons and further investigation is underway from them. 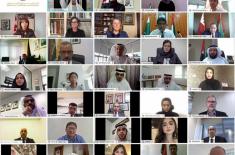