He said that 74 active patients were reported across the district in which 65 are under home isolation while 9 other are under treatment in the hospitals.

He said that three Covid patients were also admitted at DHQ hospital in which two are in critical condition while one is stable.

Responding to another question, he said that the number of suspected cases in the district are 19457 while screening of 22908 persons have also been carried out so far.

He said that the result of 894 suspected patients of the area are still awaited while as many as 17789 is tested negative so far.

He said that so far 678 positive patients have recovered in the district.

He informed that safe burial of 66 persons have been carried out in the district in which 22 deaths were out of 774 positive patients, 39 deaths were confirmed COVID-19 patients in different hospitals while five deaths were reported of suspected patients.

ISLAMABAD, Nov 28 (APP):National Command and Operation Center (NCOC) on Coronavirus Saturday said that 447 new COVID-19 cases were reported from the Federal capital during the last 24 hours.

He added 23,092 patients had been recovered completely.

Meanwhile, on the direction of Ministry of National Health Services, the district administration of Islamabad had continued smart lockdown in different streets of the capital to reduce transmission of the infection in the selected streets and other sectors.

They also started taking actions on violation of standard operating procedures (SOPs) related with the corona while visiting marriage halls, markets and petrol pumps by its inspection teams. The administration also sealed schools, shops, workshop and restaurants on violation of SOPs.

The inspection teams also issued notices to marriage halls besides imposing fines on owners of different shops. Commenting on the situation, an official of Ministry of National Health Services said several local level administrative decisions were made to control the disease.

Two more got infected novel coronavirus COVID-19 in Attock on Saturday raining the number to 774. District Attock focal person for Covid-19, Dr Saeed Akhter has informed that these positive cases were reported from Hazro- which remains hot spot of the cases in the district across the year.

Masti Khel slams India on its so called Republic D .. 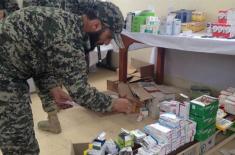