Two children were killed and one injured in a landmine explosion in South Waziristan.

The boys were playing in fields in Meshta village when all of sudden landmine exploded killing both boys on the spot.

Meanwhile two sister aged 7 and 5 died due to gas suffocation while sleeping in a room.

A marriage ceremony was going on in a house in Sorgul village Kohat when gas accumulated in room due to generator at night.

UAE is keen to support and promote the Arab-Chines .. 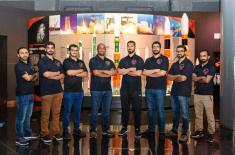