Talking to APP, he said due to various steps, there would be a remarkable improvement in the agriculture sector. Mahmud said agriculture reforms were producing a sense of courage, awareness and development among farmers.

He said agricultural loans without interest were also being given to small farmers of the province, The secretary added the Punjab government had announced various other steps for growers which were being speedily implemented.

To a question, he said small cultivators were fully benefiting from reduction in prices of fertilizers and power tariff on agri tube wells. He said roads were being constructed in villages first time in history of the country which would change rural economy. 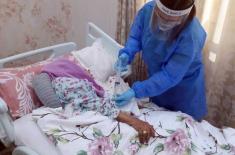