The visit aimed at imparting first hand knowledge to mainstream media through explicit interaction with project sites of KP BTAP regarding well planned practices and techniques adopted to materialize the massive plantation programme of the country's history.

Speaking at the commencement occasion of the visit, National Coordinator Reducing Emissions from Deforestation and Forest Degradation (REDD+) programme Sued Ghulam Qadir Shah said the BTAP was a mega project to revive the depleting forest cover to mitigate the adverse effects of climate change on the region. "BTAP has been adopted by many countries around the globe where as it has also been necessary to ascertain the merits as well demerits of the project. However, the visit will help the journalist fraternity to know about the project with direct access to the project sites." He said that our major chunk of news was comprising of political issues whereas environmental degradation around the globe had serious significance. "We want to bring the attention of media towards this lurking issue to educate and create awareness among the masses over environmental degradation, he added.

Ghulam Qadir Shah mentioned that in order to mitigate the risk of climate change it was pertinent to have all stakeholders on board as without mass support and coordination environmental conservation efforts were not promising.

He said the successful implementation of the project with available scarce resources was a remarkable achievement of the country which should be given recognition and thorough analysis to pave the way for the success of the incumbent government's 10 Billion Tree Tsunami.

He said the exposure to various project sites would help the mainstream journalists to have impartial, cogent and comprehensive outlook of the project.

"There has been much work done in environment conservation which requires to be highlighted and media has pivotal role in making the people acquainted with the initiatives and to play their individual role in this regard," he added.

The visit would comprise of presentation by BTAP project director at Peshawar, visits to BTAP activities in Peshawar Forest Division, Mingora, Malakand, Abbotta ad, Hazara forest region, galyat, Daur Forest and would conclude with the meeting with the Adviser to Prime Minister on Climate Change Malik Amin Aslam. The journalists would share their experience and feedback with the Adviser on BTAP activities in KP. 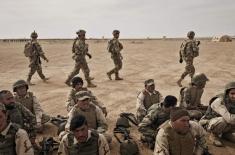