The PPP leaders could not manage the flood and coronavirus situation in the province, he stated in an interview with a private television channel.

Commenting on issue of Capt (Retd), Safdar Awan's arrest by law enforcement agency, he said a committee had been constituted to look into the matter.

He, however said that action should be taken against the responsible elements for implicating Karachi incident and added that Sindh government wanted to hide the real facts.

He said Sindh chief minister was creating confusion regarding matter of Inspector General of Police . 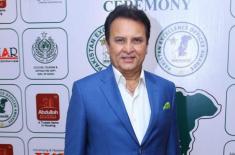