The agency reported that the head of the Atomic Energy Organization of Iran (AEOI) Ali Akbar Salehi told the parliamentary foreign policy commission that power cables damaged in what Iran called an act of sabotage have now been replaced, with power now back on and several centrifuges already spinning.

Salehi also said that enrichment did not fully stop even after the incident and the facility continued to enrich uranium up to 60 percent level purity despite protests from the international community.

Earlier this month Iran reported an incident at Natanz that damaged the plant's electricity grid in what Salehi described as "nuclear terrorism.

" Kazem Gharib Abadi, the Iranian permanent representative to the UN in Vienna, blamed the attack on Israel. Iranian authorities later identified the perpetrator as 43-year-old spy Reza Kadimi. The suspect allegedly worked at the plant. He reportedly fled Iran after the country's intelligence agency tracked him down.

Last Tuesday, Iran notified the IAEA of its intention to begin to enrich uranium up to 60 percent purity. The decision to boost uranium enrichment and to install modernized centrifuges at the Natanz nuclear facility was made in light of the recent incident.

Emirates ramps up operations over summer to serve .. 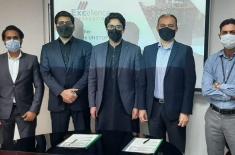