While the year saw a two-thirds increase in the financial impact of catastrophes around the world, casualties from natural disasters were far lower in 2016 than the previous year, at 8,700 deaths compared with 25,400. 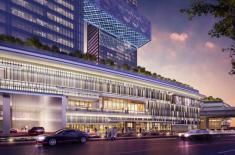 Final slide complete on One Za’abeel’s The Lin ..