KIEV (UrduPoint News / Sputnik - 30th October, 2020) The head of the Ukrainian Constitutional Court, Alexander Tupitsky, said Friday that President Volodymyr Zelenskyy's latest bill to remove all sitting judges on the court was like a coup.

Earlier in the day, the president submitted a draft law on firing sitting judges to the parliament. Before presenting the draft, the president had convened a meeting of the National Security and Defense Council to address the court's decision to cancel some anticorruption laws.

"This bill appears today, it was put together overnight, it has signs of a constitutional coup in Ukraine, I am saying this with full responsibility," Tupitsky said, as quoted by UNN news agency.

According to the senior judge, the draft law breaches two articles of the Ukrainian constitution.

The head of the court said he was summoned to the state investigators' office as a witness in a case about a criminal organization. Tupitsky added he would not show up for this interview. 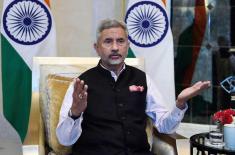