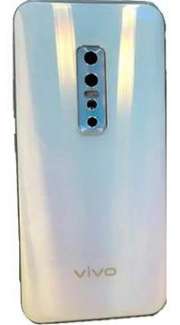 Vivo V17 Pro price in Pakistan is updated daily from the price list provided by local shops and dealers but we can not guarantee that the information / price / Vivo V17 Pro Prices on this page is 100% correct (Human error is possible), always visit your local shop for exact cell phone cost & rate. Vivo V17 Pro price Pakistan.

The world of smartphones has evolved and the gradual progress in the specs is exceptionally impressive. This year has been the era of Pop-up front cameras. The new-tech developers impressed the world with their creative invention. Vivo- the Alexander of Technology has transformed the idea of popup camera. Evolving the technology into the latest era, Vivo V17 Pro has multiplied the lens on the Pop-up camera into two.

The structuring of Vivo V17 Pro is a bit strange as the display screen is 6.44 inches but impressively has the viewpoint ratio screen is 20:9. The back of the gadget is glossed with glass and has quad-lens camera set vertically at the highest point of the body, Vivo branding at the base, and a USB Type-C charging connector on the base. The Smartphone is pretty heavy at 201 grams (around 7 ounces)and 10mm thick which makes the Vivo V17 Pro significantly handful. The dual-lens popup camera permits Vivo to dispose of the notch, leaving the AMOLED screen with slender outskirts around it.

The Vivo V17 Pro has a Qualcomm Snapdragon 675 processor with 8GB of RAM and 128GB of internal capacity. The battery is tremendous at 4,100mAh and has a Superiority of fast charging. The software is to some extent outdated as its Android 9 Pie underneath Vivo's very own Funtouch 9.1 UI. Funtouch isn't pretty or that easy to understand except if you’re known to a Vivo gadget. This is the major of the V17 Pro.

While talking about Vivo 17 Pro and Vivo V15 Pro, both lie on the same page but are each other’s major rivals.  If we consider similarities, from internal storage to Android 9.0 and even in-display fingerprint scanner you’d find both phones exactly same. The basic difference in two of them is their camera setups. Vivo V15 Pro has an exceptional Triple camera setup with 48MP Primary Camera but can’t win over the Vivo V17pro which houses a Quad Camera with similar primary cam. The front camera of both phones is based on mechanized pop-up tech, but V15 pro has a single lens on it while Vivo V17 Pro accompanies dual-lens on the phone. There’s a difference in RAM, as V17 Pro has more RAM of 8GB while V15 pro is low with 6GB only!

Yes, Vivo V17 Pro supports fast charging and with a 4100 mAh battery, it lasts long even after the continuous use.

Does Vivo V17 Pro have a removable battery?

How to install updated OS on Vivo V17 Pro?

Vivo V17 Pro get security patch updates and Android pie update. You can without much of a stretch update your phone with OTA Updates. All you have to do is: