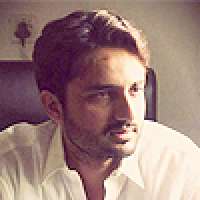 Be Wafai To Apni Had Mein Hai

Ikram Basra is a Pakistani poet, lyricist, and journalist. His work has appeared in Bayaz, Lahore, and Pareet Larhi, Chandigarh. In 2008, he was the youngest poet to represent Pakistan in the SAARC writers’ conference, and his work has been translated from Urdu into Bengali, Orian, Hindi, and English. His coming collection of poems includes an introduction by India’s legendary poet and lyricist Gulzar. His radio play Har Safar Hamsafar Se Roshan Hay was broadcast in 2009. He holds an MA in Mass Communication from Punjab University, Lahore. He has a certificate in screenwriting from Bollywood Whistling Woods International in Mumbai.