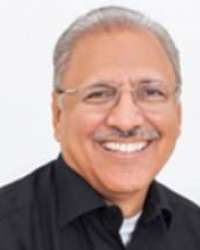 Dr. Arif Alvi is a politician, dentist and a parliamentarian. He is a founding member of Pakistan Tehreek-e-Insaf and was the Secretary-General of the party from 2006 till 2013. Dr. Arif Alvi had previously contested the 1997 general elections as a provincial assembly candidate from DHA area and then later again in the 2002 general elections as a National Assembly candidate. In 2013 he was elected as a Member of the National Assembly of Pakistan from Constituency NA-250 Karachi (See http://www.na250.com). More than 76,000 people who stood up for change voted for him. This was despite a serious law and order situation, blatant rigging and threats to people not to cast their votes.

Dr Arif Alvi is happily married with his wife Samina Alvi and they have four children, all married and settled with their families. Dr Alvi enjoys his grandchildren tremendously and considers them as one of greatest joys and pleasures of his life. He used to play squash, cricket, hockey etc in his younger days and now enjoys casual games as well as watching them.