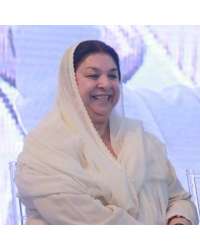 She was born on 21 September 1950 in Chakwal, Punjab, Pakistan.
She completed her early education in Neela village in Chakwal district before moving to Lahore where she was educated at the Convent of Jesus and Mary. She married in 1972.
In 1978, she did her MBBS from the Fatima Jinnah Medical University in Lahore.In 1984, she moved to the United Kingdom and enrolled in the Royal College of Obstetricians and Gynaecologists from where received a MRCOG degree in 1989 and a FRCOG degree in 1999.
She then received a degree in FCPS from Karachi's College of Physicians and Surgeons Pakistan.