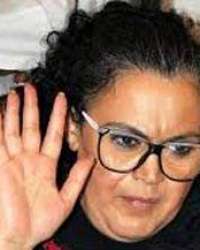 Ghinwa Bhutto is a politician and the widow of Murtaza Bhutto. She is also the sister-in-law of the late Benazir Bhutto. She is of Syrian-Lebanese origin and is the second wife of Murtaza Bhutto and stepmother of Fatima Bhutto. Ghinwa has been estranged from the powerful Bhutto family ever since she accused Benazir and her husband Asif Ali Zardari of conspiracy to the 1996 murder of Mir Murtaza. She also accused Benazir and Zardari of corruption.[1] Zardari was arrested as a suspect in the murder of Murtaza, he was later released due to lack of evidence. Her husband's killers were never brought to justice. In 1997, Ghinwa staked claim to the Bhutto political legacy. She formed PPP-SB and became the chairperson of that[2] and ran for election in Larkana in 3 Feb 1997. Benazir convinced her mother Nusrat Bhutto, then president of the Pakistan Peoples Party, to run against her.[1] Though her opponent suffered from Alzheimer's disease, Ghinwa was defeated.[1] Ghinwa lives in the Bhutto family home in Karachi with her son Zulfiqar Ali Bhutto Jr. (named after his grandfather Zulfiqar Ali Bhutto) and her step daughter Fatima Bhutto. Prior to marrying Murtaza, Ghinwa worked as a ballet dancer/teacher.[3] In 2002, Pakistani election authorities rejected her candidacy for the October 10 election. Ghinwa was rejected on the grounds of not possessing the required minimum academic qualification of a university degree.[4] In August 2007 Ghinwa Bhutto passed the BA exams from the Punjab University in First Division with 526 marks. Ghinwa, roll # 86604, appeared as a private candidate. To be eligible to contest elections, Ghinwa chose to take the Punjab University BA exam because the results were to be declared by the end of August, before the elections.[5] After the first suicide attack following Benazir's return to Pakistan in October 2007, Ghinwa remarked: "I think she has invited trouble herself. She has always thrived on this victimisation complex. She always loves to be the victim and whatever happens to anybody, at the end she is a victim."[6] However, when Benazir was assassinated on December 27, 2007 Ghinwa put their differences aside. She attended the funeral with her step daughter, Fatima.