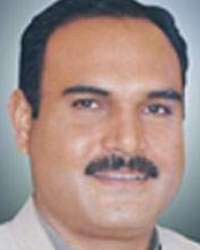 Iftikhar Ali Babar Khan Khitran belongs to Layyah and is contesting general elections 2013 scheduled at 11th May 2013 from which is a constituency of Layyah in Punjab province of Islamic republic of Pakistan.Mr Iftikhar Ali alias Mr Babar Khitran son of Mr Ahmad Nawaz Khan was born on November 7, 1971 at Layyah. He graduated in 1993 from Baha-ud-Din Zakariya University, Multan and also holds the degree of LL.B. An agriculturist and a businessman, who served as Councillor, Municipal Committee during 1997-99 and as Nazim, Union Council during 2000-04. He has been elected as Member, Provincial Assembly of the Punjab in general elections 2008 and is functioning as Chairman, Standing Committee on Cooperatives. He has visited Malaysia, Sri Lanka, Thailand, Dubai UK, Uzbekistan and Morrocco. His uncle, Mr Rab Nawaz Khan remained Member of Punjab Assembly during 1972-77.