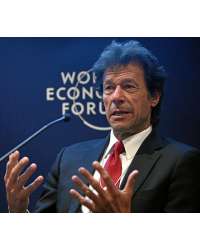 Imran Khan Niazi PP, He is a Pakistani politician, former first-class cricketer and philanthropist who leads the Pakistan Tehreek-e-Insaf and serves as a member of the National Assembly.
In 1996, Khan founded a political party, Pakistan Tehreek-e-Insaf (PTI).
He ran for the seat of National Assembly of Pakistan in Pakistani general election, 1997 as a candidate of PTI from two constituencies - NA-53, Mianwali and NA-94, Lahore - but was unsuccessful and lost the both seats to candidates of PML (N).