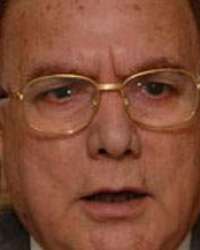 Mian Manzoor Ahmad Wattoo is a senior statesman, politician and the current minister of the ministry of states, frontiers and Kashmir affairs. He is the current provisional president of Pakistan Peoples Party (PPP). Active in national politics since over 30 years, Wattoo dissolved his party and campaigned on party ticket of the Pakistan People's Party in 2008 general elections. On May 30, he joined the cabinet and served as an advisor to Prime Minister Yousaf Raza Gillani before assuming the charge of the ministry of states and frontier affairs. Mian Manzoor Ahmed Wattoo was first elected as Chairman District Council Okara in 1983 during the non-party elections of the Zia era. Then in 1985, he secured the office of the Speaker of the Provincial Assembly of Punjab, the largest province of Pakistan on Pakistan Muslim League ticket. Thrice elected for the same office, he secured the office of the Chief Minister of Punjab in 1993 on the PML (Junejo) ticket after a vote of no-confidence in the Punjab legislature against PML-N's serving chief minister Ghulam Haider Wayne. Wattoo served as Federal Minister for Industries and Production in the PPP government of Prime Minister Syed Yusuf Raza Gilani and in November 2009, his portfolio was changed and he became Federal Minister for Kashmir Affairs and Northern Areas.