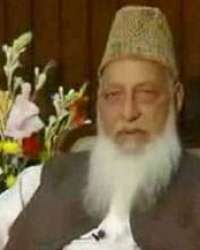 Naimatullah Khan was the Mayor of Karachi from August 2001 to June 2005. Naimatullah Khan has been involved with Islami Jamiat-e-Talaba, and is a senior member of Jamaat-e-Islami Pakistan. Naimatullah Khan was born in Ajmer, Rajasthan, British India on 1 October 1930 to Abdul Shakoor Khan,a railway postmaster and Bismillah Begum, a housewife. He was the third child of Abdul Shakoor Khan. He had two elder sisters and two younger brothers. In 1940, his father died of tuberculosis. The family then moved to Shahjahanpur, Uttar Pradesh, British India to live with their maternal relatives. He built himself a proper house in 1967 in which he lived until 2011. Naimatullah Khan was always inspired by the writings and works of Maulana Maududi, the founder of Jamaat-e-Islami. His enternce into politics started as far back as late 1960s when he helped organise political programs at his own house. He formally joined the party in 1974 while at Hajj in Makkah. Khan worked diligently for the party slowing rising through the ranks. In 1977 Khan was jailed in Sukkur for holding a rally in Karachi at a time when public gatherings were not allowed due to orders by then Prime Minister Zulfiqar Ali Bhutto. Khan spent three months in jail. Khan recalls how he met the infamous General Niazi at the Sukkur jail. Martial law was imposed in 1977 and elections were held in 1979. Khan was the top most contender to become the mayor of Karachi. Citing personal issues Khan refused to take the office. Khan at that time had nine kids most of whom were very young. Khan realised his children were too young for him to take such an important role. As his replacement Abdul Sattar Afghani was made the mayor who served in the capacity until 1987 after getting re-elected in 1983. Non political elections were held in 1985 and Khan won the PS-81 constituency from Karachi. He subsequently became the Leader of Opposition of the Sindh Assembly from 1985–88. President Zia-ul-Haq was killed in a plane crash in 1988 and all the prevailing assemblies were dissolved. Khan later became the Jamaat-e-Islami Ameer of Karachi in 1990. He served in this capacity until 2001 when he had to resign to take the office of the Mayor of Karachi. In the meantime Khan also retired from his law practice in 1991 after a 34-year career.