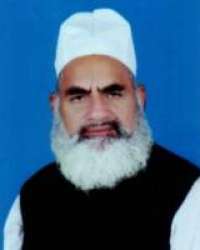 Maulana Muhammad Rehmat Ullah son of Maulana Muhammad Zakar was born in 1935 and has completed Fazal Shahadatul Almia. He is serving as Nazim-e-Omoomi, Jamia Muhammadi Sharif, Chiniot. A religious teacher, who has served as Member, District Council Jhang during 1983-85; as Member, Majis-e-Shoora during 1981-85; and as Member, National Assembly for three consecutive terms during 1985-93 and then from 1997-99. He has been elected as Member, Provincial Assembly of the Punjab in general elections 2013. He also remained “Justice of Peace” in District Jhang. His father was Member of Punjab Legislative Assembly during 1951-55 and Member National Assembly during 1972-76.