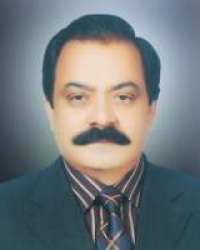 Rana Sanaullah Khan, a Senior Advocate, High Court, who has to his credit a long and hard struggle against the dictatorship for the restoration of democracy, revival of the Constitution and a strong voice for human rights. He was many a time tormented and was also put behind the bars for his struggle but he always stood firm against all odds and never compromised on his principles. He was first elected to the Provincial Assembly of the Punjab in 1990 and served as Deputy Opposition Leader during 1990-93. In his second term, he remained Member of Punjab Assembly during 1997-99. He was elected to Punjab Assembly for the third time in 2002 and functioned as Deputy Opposition Leader during 2002-07 in his capacity as Parliamentary Leader of Pakistan Muslim League (N). He was elected to the Punjab Assembly for the fourth term in 2008 and functioned as Minister during 2008-13 holding the portfolio of Law & Parliamentary Affairs with additional charge of Revenue and Local Government & Community Development Departments. He has been elected for the fifth term in general elections 2013 and is serving as Minister for Law & Parliamentary Affairs.