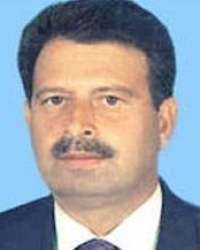 Rana Tanveer Hussain is the former Minister of Defence Production in the Prime Minister Yousaf Raza Gillani-led cabinet. He is son of Haji Muhammad Anwer who died in 2008. He was elected from Sheikhupura-II NA-132 as a member of National Assembly from Pakistan Muslim League (N).[1] He supported four women in reserve seats of MPAs