ISLAMABAD, (UrduPoint / Pakistan Point News - 20th july, 2016) : Ghulam Muhammad Safi a senior Hurriyet Worker Wednesday urged all the political parties to join hands and formulate a national level Kashmir policy to show their support to Kashmir cause. Talking to APP in an interview, he said that "resolution of Kashmir issue can usher an era of peace, prosperity and tranquility not only for India and Pakistan but for the whole region". He said that entire Pakistani nation stands with their Kashmiri brothers in their struggle for the right to self determination and Pakistan would continue to support Kashmiri people socially, morally and politically. He condemned the atrocities, barbarism, inhuman violence and brutalities by the Indian forces against the Kashmiri people saying that India can never suppress the voice of Kashmiri people through force.

The sacrifices and struggle of Kashmiri people for freedom would not go wasted, he added. He said that the killing of Kashmiri freedom fighter Burhan Wani on July 8, gave a new soul and vigor to the Kashmir movement and people of Kashmir are ready to pay any price for their right of self determination.

He also demanded United Nations and other international forums to take serious notice of the Indian brutalities in occupied Kashmir and resolve the longstanding issue in accordance with the UN resolutions. Meanwhile, Athar Masud Wani, a senior journalist belonged to Kashmir said that last three generations of the Kashmiri people have rendered unprecedented sacrifices for their just right to self determination.

Indian tyrannical acts and brutalities in the valley of Kashmir can never be suppressed by brutal use of force and India has failed to win the hearts and minds of Kashmiri people. He appreciated the government endeavours to observe Black Day and Accession to Pakistan Day to raise their voice against inhuman attitude of Indian forces and show their solidarity to Kashmiri people.

"The people of Kashmir are not alone in their fight and the people of Pakistan would continue to stand with them during their fight for their just right". He called upon the world powers and international community not to become silent spectators and come forward to put pressure on India to resolve Kashmir dispute. Convener APHC, Tahir Masood said "we have to make the international community realize that this region will be having threat of destabilization, if Kashmir issue is not resolved". "We have a single opinion and we will not set back from it that Kashmir issue should be resolved according to the resolutions of United Nations", he said.

Another leader, Mehmood Sagar said Pakistan has to adopt offensive approach instead of defensive in pursuing the resolution of Kashmir issue according to the aspirations of Kashmiri people. He said tha Pakistan must show strong resistance over killings of innocent Kashmiri people and call its High Commissioner in Dehli back, in protest. 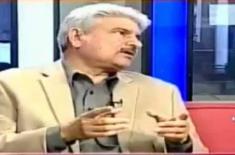