PRAGUE (UrduPoint News / Sputnik - 22nd February, 2021) Slovak Prime Minister Igor Matovic called on the cabinet to hurry up with buying the Russian COVID-19 vaccine Sputnik V, noting that the national regulator approves a lot of drugs not authorized by the European Medicines Agency (EMA), but political opposition has arisen only against the Russian shots.

On Thursday, the Slovak cabinet discussed the purchase of the Sputnik V vaccine, but the decision was blocked by Deputy Prime Minister Veronika Remisova, who heads the pro-EU centrist "For the People" party, the smallest one in the ruling coalition. Remisova called for waiting for EMA to authorize the Russian vaccine. Health Minister Marek Krajci, meanwhile, can independently decide on purchase of vaccines without an EMA authorization, but he decided to secure cabinet support for that.

"Why don't we let people freely decide whether to trust a vaccine that is deemed safe in Hungary, San Marino, Dubai, Bahrain and so on?" Matovic wrote on Facebook late on Sunday.

The prime minister warned that, by the time EMA approves the Russian vaccine, it may be that its stocks will have been sold out for the year ahead, and the country will have to rely only on the supplies that arrive with big delays through the EU.

"It turns out that someone wants us to suffer from a lockdown and lose human lives in vain for weeks and months," the Slovak prime minister stated.

Matovic earlier suggested abandoning a geopolitical approach to vaccine issues and focusing on citizens' health instead. The Russian vaccine has been approved in over 30 countries. 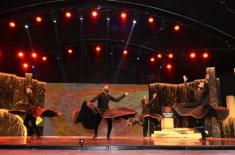