CSL Side Tianjin Tigers May Fold In A Few Days, Media Report

Owner TEDA Holding has halted its investment in the club, and a decision on the club's future will be made public as soon as possible, Soccer news reporter Li Xuan wrote on social media on Tuesday.

"As the [TEDA] group has made up its mind, there is no point in holding on for the club," Li said.

"The official announcement will be made in a few days, there is no chance of turning around for the 23-year-old club," Wang wrote on Chinese social network Weibo.

Soccer News reported last Saturday that Tianjin TEDA would discontinue investment in the club. Neither Tianjin TEDA nor Tianjin Tigers made any official comments on those reports.

Tianjin Tigers are yet to start pre-season training ahead of the the 2021 CSL campaign, with several players voicing their misgivings about the club's financial woes.

Defender Liu Yang wrote on social media on February 2 that all the players were concerned that the club would fold.

"We haven't gathered for training since the end of the 2020 season, and all the players are very worried that the club of 23 years will disappear," he said.

Another Tianjin-based CSL club, Tianjin Tianhai, disbanded last May after failing to attract new investment to the debt-ridden outfit. 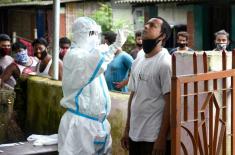