A cinema festival red carpet without internationally known celebrities, screaming fans and over-the-top fashion excess turns out to be, well, not much more than a carpet that's red

Such has been the case over the past two weeks at the Venice film festival, which is set to award its top film on Saturday, due to the the absence of A-list Hollywood celebrities and throngs of frenzied admirers.

To be sure, the ruffles, sparkles, plunging necklines and gravity-defying heels have been in full show at the glitzy festival on the beachfront Lido.

But for dedicated fashion watchers accustomed to the high drama of prancing, preening stars in more normal years, Italy's world renowned cinema catwalk has lacked sparkle, like an Aperol Spritz without the prosecco.

"It's a festival without stars because Hollywood is still in lockdown," Festival Director Alberto Barbera explained to AFP the day before the 11-day event began.

"Will there be less glamour? Yes. Will there be fewer stars on the red carpet? Certainly." - Wearing it twice - Gone were the top Hollywood faces that flocked to the festival last year -- Penelope Cruz, Kristen Stewart, Iman, Kate Upton, Scarlett Johanssen and Sienna Miller, among others, with Brad Pitt and Johnny Depp representing the tuxedo-clad men.

Instead, Cate Blanchett, president of the jury, took on the mantle of fashion authority, making her opening night appearance in a shimmering midnight blue Esteban Cortazar caped gown, a look she wore once before in 2015.

Gia Coppola sported a yellow, pink and green boho chic look from Gucci, while Vanessa Kirby opted for a dramatic crimson Valentino gown with a turtleneck and an exposed back.

The British "The Crown" actress, who stars in two films in competition at the festival, also showed up on the red carpet in a severe but sexy black square-shouldered Armani suit with plunging neckline.

Another Italian label, Ermanno Scervino, was unwittingly caught up in the festival's only fashion faux-pas, witnessed by sharp-eyed paparazzi.

The girlfriend of football star Cristiano Ronaldo, Georgina Rodriguez, showed up at the Lido in a water-taxi, posing for photos in a sharp white jacket and pants created by the fashion house -- but forgot to remove the label inside.

- Insiders only - Fans wanting to follow the latest red carpet looks have been following the internet or Instagram for inspiration, as Covid-19 regulations have prohibited their presence at the event.

"The red carpet of this edition is a bit like those (football) league games we have seen in the last two months: without fans, with only insiders," wrote Grazia magazine.

Still, one veteran photographer who has covered the festival's red carpet for 21 years said this year's version was still rewarding, despite its lower profile.

"If there were George Clooney, Lady GaGa or Madonna it would be the best," Getty Images photographer Daniele Venturelli told AFP. "But we can be satisfied." "I'm very happy it's happened," he said. "It's a good sign."Volume levels on the red carpet were still high despite the lack of fans, Venturelli said, given that the photographers shout, hoping to catch the eye of the stars in their finery.

"It seems like we're the fans." he said. "Photographers who transform into fans, because we're screaming all of us." 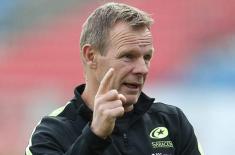