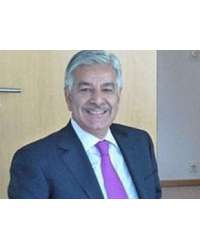 Khawaja M. Asif was born in Sialkot on August 9, 1949. He was elected for his third term as MNA from a PML(N) seat. He was previously elected as MNA for the terms of 1993 and 1997. He has also served as senator for the term of 1991-1993 A businessman and a banker by profession, he received B.A/L.L.B degrees from Punjab University in 1970. During 1997-1999, he held the portfolio of Chairman Privatisation Commission with the status of a federal minister. Khawaja M. Asif has extensively travelled across the world including the U.S.A, U.K, France, Germany and Japan and resided in the U.A.E for 12 years. Married, he has a son and three daughters.