PESHAWAR, J(UrduPoint / Pakistan Point News - 21th july, 2016) : City University Peshawar has formally entered into partnership with the ABE UK Qualifications and Exam Centre for capacity building of varsity in the areas of Management, Marketing and Entrepreneurship. The formal launching ceremony of the City University-ABE UK partnership was held at the premises of City University on Thursday.

The formal partnership launching ceremony was necessitated after the MoU inked between the two organizations some two months back. Education Minister KP Muhammad Atif Khan formally launched the partnership between the City Univercity and ABE UK.

Gerath Robinson CEO ABE UK in his presentation on the occasion threw light in detail on the aims and objectives of the partnership with City varsity. He informed that the students of different programs of the city university would benefit from the partnership.

Governor Balochistan lays foundation stone of IT U .. 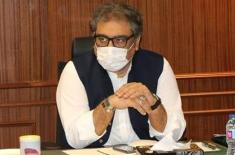