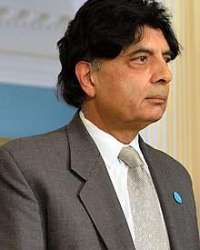 Chaudhry Nisar Ali Khan born 31 July 1954) is a Pakistani politician who recently served as the Interior Minister from 2013 to 2017. A former leader of the Pakistan Muslim League (Nawaz), Khan had been a member of the National Assembly of Pakistan between 1985 and May 2018. He was the Leader of the Opposition in the National Assembly from 2008 to 2013.
Born in Chakri Vakilan, Khan was educated at Army Burn Hall College. Khan has served in various federal cabinet positions since 1988. He briefly served as the Science and Technology Minister in 1988. During Prime Minister Nawaz Sharif's first and second ministries, he held the cabinet portfolio of Petroleum and Natural Resources Minister. During the Gillani ministry, he briefly served as the Food, Agriculture and Livestock Minister with the additional portfolio of Communications Minister. In June 2013, during the third Sharif ministry, he was appointed as the Interior Minister, which he held until the dissolution of the federal cabinet in July 2017 following the dismissal of Sharif by the Supreme Court.