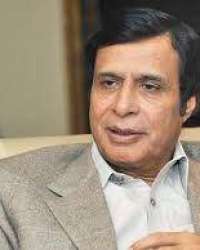 Chaudhry Pervaiz Elahi born 1 November 1945) is a Pakistani politician who served as the first and only Deputy Prime Minister of Pakistan in 2013. After a successful campaign in the 2002 general elections, he became the Chief Minister of Punjab Province and tenured until 2007. In 2008, he served as the leader of the opposition in the National Assembly of Pakistan for short time. He had been a member of the National Assembly from 2008 to May 2018.