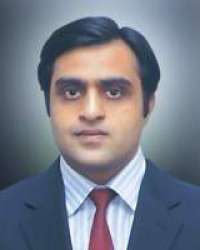 Sahibzada Ghullam Nizam-ud-Din Sialvi son of Sahibzada Ghullam Naseerud- Din Sialvi was born on October 9, 1980 at Sargodha. He graduated in 2008 from Al-Khair University, Sindh, Sukkur. His father, served as Member, Punjab Assembly for three consecutive terms during 1985-88, 1988-90 and 1990- 93 and also functioned as Provincial Minister for Auqaf during 1990-93. An agriculturist, who remained Member, Provincial Assembly of the Punjab during 2008-13 and has been re-elected for the second consecutive term in general elections 2013 and is functioning as Parliamentary Secretary for Livestock & Dairy Development. His uncle, Hazrat Khawaja Hameed-ud-Din Sialvi served as Senator during 1988-93.