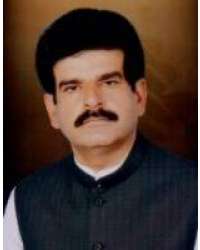 Mr Shaukat Hayat Khan Bosan son of Mr Khizar Hayat Bosan was born on November 4, 1968 at Multan and is a Matriculate. An agriculturist, who served as Member, Provincial Assembly of the Punjab during 1997-99; as Tehsil Nazim, District Multan during 2003-05; and as Town Nazim, Bosan Town during 2005- 10. He has returned to Punjab Assembly for the second term in general elections 2013. His grandfather, Mr Khan Muhammad Akram Khan Bosan served as Member, Punjab Legislative Assembly during 1951-55; as Member of National Assembly for two consecutive terms from 1962-69; and as Senator; his brother, Mr Sikandar Hayat Khan Bosan remained Member of Punjab Assembly for three consecutive terms during 1985-93; as MNA during 1997-99, 2002-07 (functioned as Minister of State as well as Minister for Food & Agriculture,) and is a sitting MNA and is functioning as Minister for National Food Security and Research. His nephew, Mr Muhammad Husnain Bosan, served as Member Provincial Assembly of the Punjab during 2002-07; and his father-in-law Mr Ghulam Qasim Bosan was Member of Punjab Assembly during 1985-88.