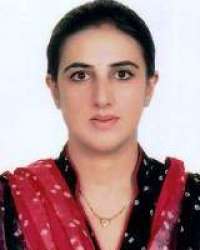 Mrs Nazia Reheel wife of Sardar Raheel Anwar was born at Abbottabad. She studied throughout from Army Burn Hall School & College Abbottabad and completed her graduation in Law and Political Science. She was elected Member of Provincial Assembly of Punjab in 2008 and served as Parliamentary Secretary for Special Education and has returned to the Assembly for the second consecutive term in general elections 2013 and is functioning as Parliamentary Secretary for Revenue. She has also been serving as a Member, Syndicate Government College University, Lahore. Her grandfather, Sardar Khurshid Alam served as the first Collector (Land) N.W.F.P. (Now Khyber Pakhtunkhwa). Her eldest uncle, Sardar Fakhr-e-Alam served as Chief Justice Peshawar High Court during 1986-91; and also functioned as Chief Election Commissioner of Pakistan during 1993-97. Her uncle, Sardar Muhammad Mushtaq served as Member Khyber Pakhtunkhwa Assembly during 1990-93 and 1997-99 and also functioned as Chairman DDAC and was MNA from Haripur (Khyber Pakhtunkhwa) during 2008-13. Her father-in-law, Sardar Altaf Hussain (late) remained Member of Punjab Assembly during 1985-88. She has travelled to Malaysia, Singapore and United States of America on official trips.